During the set up of a new Android device (Skorpio X5), we are facing trouble by configurating the decoding of QR Codes.

Comparing with the Decoding configuration available for Skorpio X3+ (Windows CE), there is a lack of the “Data separator” option: 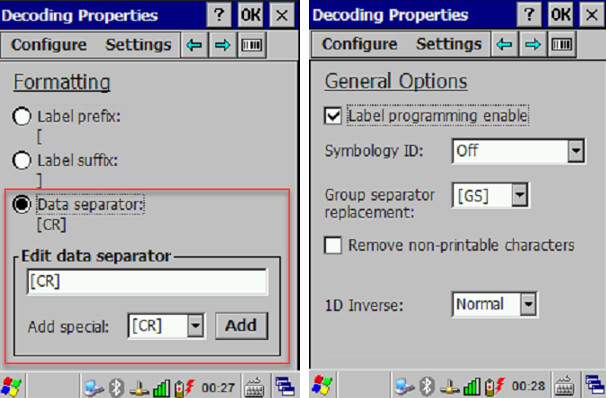 In Skorpio X5 (Android) there is only available “Group separator replacement” option: 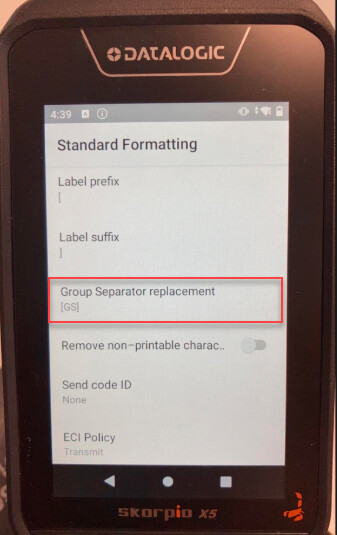 The issue is related to some separators (Car Return) included in a QR Code that are not being shown in the reading done by the scanner.

I would be really grateful if anyone could help me with the topic,

Many thanks
Best regards

The “Data Separator” parameter was only available on X3 products and was only supported for RFID devices. The meaning of the parameter was to specify a character which is output to separate multiple data fragments reported in a single result. It was originally defined for Magnetic Stripe readers to separate the different data tracks, but was also used to split one RFID tag data from another when they were reported in a single result. They are not supported on X4+ devices because there is currently no reader that provides a similar capability.

Regarding your issue with QR codes and missing Carriage Return characters, I can suppose you could be experiencing issues with the “Remove non-printable characters” parameters setting available under Datalogic Setting / Scanner Settings / Formatting / Standard Formatting.
Similar issues could happen also with GS1 barcodes (like GS1-128 or GS1-Datamatrix) with improper GS character substitutions for GS characters embedded inside the data content of a GSData label. This would be possibly be addressed by changing the “Group Separator replacement” from [GS] to [CR] or to any other printable character.

If you need more info, fill out this form (link) to get in touch with a Datalogic technician and analyze the issue in more depth.